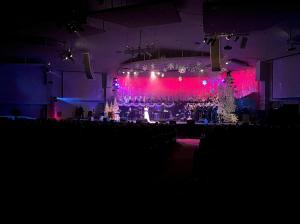 The Portraits of White 2016 winter concert is over and my feelings are all mixed up this year. Last year, I felt nothing but joy and relief that the big event was over. It took more effort and time than I ever imagined and there was no “let down”, only “let up”.  I loved every minute of it but was glad to move on.

But this year felt different. I struggled with both “let down” and “let up”, something I wasn’t prepared for.

As Ed (conductor) and I contemplate whether to do the show again next year, given the fact that it is a year-long marathon for us and for some of the team, I have to consider lots of variables – which contributes to the feeling of “let down”. Can I really pull this off year after year, I wonder to myself. But then I picked up TIME magazine at the library yesterday in preparation for what I planned to be a “do nothing” day today since they forecasted snow and ice.

It’s the first day I’ve done “nothing” for a very long time. Even when I try to “do nothing” I can feel and see the clouds of the snow monster (my nickname for Portraits of White) billowing in my head. I can’t truly unwind until the show is completely over. I’ve learned that’s the nature of pursuing dreams and callings. Doing the show is like enjoying the snow fall for a few short moments and then realizing you have to get up and start shoveling to clear a path so life can move on.

As I turned the pages of TIME, I was so struck by one of the articles, I put down the magazine and wrote out my thoughts in an email to Ed and realized I was actually writing a blog…..

So here it is:

My laundry is done, house is clean and Christmas decorations are up and we are getting the wintry mix they called for – though I was hoping it would be snow. It feels nice to do nothing after a year of preparing for Portraits of White….the snow monster, as I affectionately call her now.

I picked up a few books for Tom at the library yesterday and a couple of the latest TIME magazines and decided to peruse the latest issue of TIME (something I rarely do).  I was struck by an article featuring the most influential photos of all time. Page 80 has the caption: “How a picture can save 1.5 million lives” with the image of a woman who is barely skin and bones, in a wheel barrow, that is obviously dying but is being hauled to a feeding center.  It was taken during the famine in Somalia in 1992.

As I turned the pages, they listed one image after another that illustrated how the image started a chain reaction of awareness or change, such as the photograph of the boy on the beach in Turkey in the refugee crisis. In a world of millions of selfies and social media posts, you can start to forget the powerful impact one image can have and TIME somehow reminded me of the potential of one photograph…which led to the realization that additionally, one song can have that kind of impact.

As much as I love to entertain people with the Portraits of White concert (and other concerts that I do) these pictures reminded me of what I REALLY want to accomplish with what I write and perform.

I want to create songs that serve as an “audio snapshot in time” that could potentially change someone’s course in life from despair to hope, from ignorance to awareness of God’s love for them, from hatred of the holidays to a realization that things can be different if they simply stop and Take Another Look.

My prayer today: “God, help me capture Your heart for people and display it with such starkness and wonder, that it could potentially save 1.5 million lives or more.”

I don’t know if a song or a photo can save 1.5 million lives, but I want to spend my life giving it a shot.

TIME magazine’s article on the most influential photos of all time.

Their sound is comforting...
Have I mentioned how much I love this girl?!
Happy to be back playing piano at PennState Health. Thank you Center Stage Arts in Health. 💜💜💜💜
$808 has been raised for my hometown food bank so far. Vote for my song “Inside Things” and all proceeds from today’s vote will support Big Spring Area Food Bank. www.globalrisingsong.com