Skip to content
Since my Mother was the one who made sure I had time and resources to nurture my love for the piano, it seems appropriate to start this special week of ticket sales off (honoring National Piano Month) with a tribute to her life and to all mothers who take time to invest in their children.
September 24, 2014, my Mother, Bertha Mae Sollenberger Crider Heisey went home to heaven. It was the first year of the Portraits of White concert and she never got to see it.
My sister posted this on FaceBook the day she died.
Wednesday morning, 7:48 September 24, 2014
Bertha is gone. It is done.
Just a gradual fade at the end,
less and less breath….
And then the last.
I was with her all night and at the end.
No struggle.
Peaceful departing.
This part of the journey is over, and a new one begins.
September 24, 2014 6:55 am
Sunrise officially is 6:59 …. Good choice, Mother.
Bon voyage! 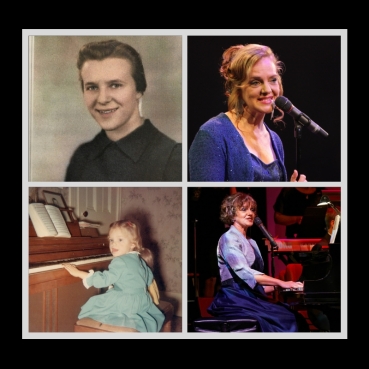 I spend anywhere from four to seven hours a day practicing the piano for the annual Portraits of White music extravaganza. The first year I decided to do the show, I prayed that God would confirm that His hand was in this adventure by leading me to a grand piano of my own.

If you’re going to spend that many hours practicing, it’s important to have a good piano to practice on. Every piano has a unique touch and feel. I wanted a piano that would make my muscles work hard and be ready for the grand piano we would rent for the show. Just like you don’t want to run a marathon without having spent a lot of time getting your muscles in shape, so you want your fingers to be ready for the show!

As we celebrate National Piano Month, it seems appropriate to tell the amazing story behind the piano that I now have in my studio. It all came about thanks to Portraits of White. 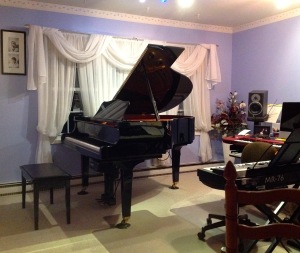 Ever since I was a young piano student and my piano teacher purchased a new baby grand piano, I could tell a big difference in the way the new grand played compared to her old spinet. From that moment, I began to dream of, wish for and beg God for one of my own.

I spent all of my life practicing on my Mother’s old Wurlitzer and was grateful to have it when my husband and I bought our first home.

In January of 2014, I asked my husband if this could be the year I could get a grand piano. Most of my music income has been invested back into my CD projects and building a career in music. Since I decided to move ahead with the first Portraits of White concert, I felt it was time to look for a baby grand. I knew I’d be spending lots of time at the piano preparing for this concert.

We agreed that this would be the year, determined a budgeted amount we could afford for a used grand and I prayed that God would lead me to the right one for me. Tom was going to talk to our man at the bank and see if we could get a loan.

I had been in counseling working through some issues and my counselor advised me to take up skating—knowing it was something I loved to do as a young girl. I took her advice and loved it so much, I hired a coach to work with every week. I skated a few hours a day, five days a week, I loved it so much!

The week after Tom and I decided to commit to finding a piano for me, I walked into the rink (around 6:00 a.m.) and my coach greeted me in his cheery British accent. (He had been Great Britain’s men’s figuring skating champion in 1989). He said, “You’re a musician, do you happen to know anyone looking for a grand piano?” I think my jaw must have dropped to the ground. But not for long! I eagerly said, “Yes, I AM!”

They were moving to London, England and their newly purchased grand (barely used) couldn’t go along. I went to their house and played it. We made an offer and they accepted. It was less than we budgeted and we didn’t need a loan!

On February 6, 2014—my Mother’s birthday, it arrived. Dare I mention that we were in the midst of a heavy snow when it came! Perfect for Portraits of White.

There are many times I sit down at this piano and thank God for the privilege to have one of my own (after 40 years!!) and with such a special back-story. Who would have ever thought taking up figure skating could lead to an answered prayer for a grand piano! Go figure.

If you want to come to the 2018 show, click HERE for more information.

We are offering 20% off all tickets September 24 – September 28, 2018 to celebrate National Piano Month.

Tickets are NOW on sale! #christmas #holidayshow #holidayconcerts
New floor, new kitten, new music to collate for Portraits of White 2021!
While I work…tending to Bernie who needs some TLC.
I’m on my way in to Penn State Hershey to play the piano and I see lots of these bugs on the sidewalk. I don’t know what they are, but I stop to take a better look and notice the intricate design. Beautiful.
Back on the bike…finally.